This post is the second in a series of blog posts written by George Washington University students in Dr. Joshua A. Bell's anthropology graduate seminar Visual Anthropology: The Social Lives of Images (Anthro 3521/6591), Fall 2016 graduate course. Dr. Bell is the Curator of Globalization in the Smithsonian's National Museum of Natural History's Department of Anthropology. Students in this course chose a collection that features visual materials (drawings, film, photographs, or paintings) from the National Anthropological Archives, and researched its material, thinking through the scale and scope of the collection and situating it within the wider discipline of anthropology. These collections are available for research at the National Anthropological Archives. 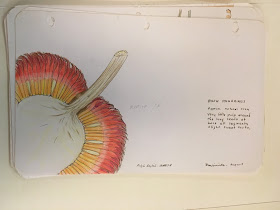 Smitty was not a proclaimed ethnographer, but his collection of typed and written notes (see example, image 2) provide rich ethnographic detail of his daily life, opinions, and interactions with local people in Bougainville and New Guinea. The materials point to the kinds of work Smitty engaged in, and how he spent his time and thoughts during this unique situation in New Guinea—but we cannot know for certain why he engaged in this work. Perhaps he was bored. Or, more likely, he had a deep interest for natural history, and by extension anthropology, which continued to manifest throughout his life in different ways—for example, in bird watching. As much information and meaning we can gather from this collection, it is also worthwhile to acknowledge the information that is simply not available. In this way, we can see how those who engage with these materials become integral to their interpretation, significance, and continued social life in new milieus over time (including me as I write this post).

The collection contains a lot of written text. In addition to Smitty’s personal notes, the collection contains vast collections of folk tales—this includes correspondence with anthropologists such as Dr. C. A. Schmitz in the early 1960s about obtaining copies of these tales, and letters indicating their eventual (partial) publication. These folk tales greatly influenced Smitty’s own work—but based on his extensive sketchbook, so did the physical environment around him. Written text, particularly for ethnographers, represents the dominant methodology and way of seeing, telling, and sharing of field research (Geismar 2014). Drawing has not been developed fully as a method for anthropologists, but scholars of visual culture emphasize the ability of drawings to provide a “counter-narrative for fieldwork and dominant paradigms of visual representation” (Gesimar 2014:98). 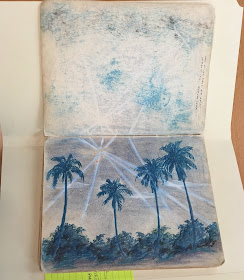 Typically, sketches are hidden components of notebooks, filling spaces between text and never finding a public life of their own. By making Smith’s personal collection visible, how may we “recuperate lost stories of personal experience and alternative histories of ideas” (Geismar 2014:97)? Smith’s sketches depict images we would not typically associate with military activity, indicating his sensitivity to the nuances of his surrounding environment (see images 3 and 4). Note the micro-view of flora in image 3 and the care Smith takes to detail its shapes and colors. Rather than knowing whether or not this “bush pandanus” is a precise copy of what is in front of Smith, the bright colors and particular perspective may “undermine the naturalism of the sketch” (Geismar 2014: 98)—perhaps giving us insight into the illustrator’s subjectivity, methodology, and emotional/ sensual/ visual proximity to the object in addition to the object itself.

And what are we to make of Smith’s depiction of one of his first air raids (see image 4)? The blues and contrasts of light suggest to me beauty more than the notion of fear a first military “raid” might be assumed to entail. These sketches (what and how Smith sketched) not only portray the aesthetics of local and military life in these regions, but also hint to how Smith interpreted what he saw—they shine light on his own subject position in the field that complicates his fixed role as military personnel/ethnographer. In “What do Drawings Want,” Michael Taussig romanticizes the potential of drawing in contrast to photographs, and perhaps rightfully so. He writes, discussing John Berger (2007), “a photograph stops time, while a drawing encompasses it” (Taussig 2009:265). Creating images through drawings inevitably takes a greater amount of time then capturing that image in a photograph. Drawings also indicate a more intimate connection between creator and object, inevitably exposing the subject position and viewpoint of creator in a different way than photography. And, in the case of Smith’s collection, in a way that complements the text and gives it deeper nuance of life and meaning. 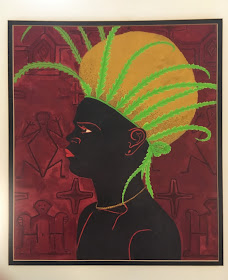 Portrait, MS 2014-06: Papers and Artwork of Robert T. Smith, National Anthropological Archives, Smithsonian Institution.  According to donors of collection, “The enclosed portrait was the individual who was Smitty’s guide of many years.”
According to his friends, Donna and Sue, Smitty was “an intensely private person, he revealed very little about family or his past life, except stories he loved to tell about New Guinea or Greece, two of his favorite places to travel” (Ewing and Minahan n.d.). Smith may have kept his drawings private, feeling more inclined to publish written text—but the drawings and text together continue to tell vivid stories, and are further imbued with meaning as they live on in the NAA. One of the most fascinating pieces of Smith’s collection is a large framed portrait of “Smitty’s guide of many years” (image 5). But the collection does not explicitly say: who was this guide, and how did he and Smitty meet? Where did this fabulous portrait live before coming to NAA? Did it reside among the other artifacts of Smith’s life? What kind of history and network of relationships does this material subsume? What story does this—can this— portrait and collection continue to tell? Rather than strictly telling one particular story, the Robert T. Smith collection—mixed like all mixed boxes (Edwards and Hart 2004)—is “syncretic” of life. The materials live on at NAA where they continue to garner life history.

*Please be aware that the Robert T. Smith Papers at the National Anthropological Archives are currently unprocessed; please contact the Reference Archivist for access information.